At the end of Sept 2013, I got to fulfill a dream for the second time this year – to attend the Clinton Global Initiative. Established in 2005 by President Bill Clinton, the Clinton Global Initiative (CGI), an initiative of the Clinton Foundation, convenes global leaders to create and implement innovative solutions to the world’s most pressing challenges. CGI Annual Meetings have brought together more than 150 heads of state, 20 Nobel Prize laureates, and hundreds of leading CEOs, heads of foundations and NGOs, major philanthropists, and members of the media. To date CGI members have made more than 2,300 commitments, which have improved the lives of over 400 million people in more than 180 countries. When fully funded and implemented, these commitments will be valued at more than $73.1 billion.

The mission of the Clinton Global Initiative (CGI) is to turn ideas into action.

As I prepared for my trip to the 2013 CGI meeting – Mobilizing for Impact – in New York City, I reviewed the agenda which included such topics as:

I felt like this CGI meeting was meant for me and all of the issues that most mattered to me.

I was also struck by the agenda items of:

These topics were reflective of people’s greatest frustration: how could do they do more with less?  This frustration played out at several levels.

At the global level, CGI paints the picture of both the challenge and opportunity of doing more with less:

By 2030, energy demand worldwide is forecasted to increase by 50 percent, while more than two-thirds of the world’s population may face serious water shortages. The essential natural resources that provide heat, light, food, and income to the global population are threatened by long-term demographic and development trends. Individuals, communities, and businesses around the world can work together to bridge the gap in supply and demand for nature’s services.

Developing Leadership Within and Around You

The leadership model for the 21st century requires that people in every role in their company be leaders in the positions they happen to hold. Leadership is no longer about executives and senior managers dictating what needs to happen. The solution is found in how you establish and master relationships and partnerships as a leader. Ultimately, you have to develop the leader within you and then support those around you to do the same.

The Triad: Structure to Empower Innovation and Productivity 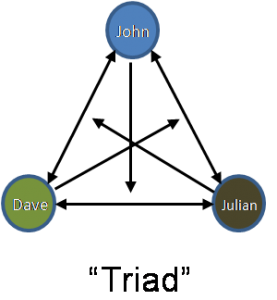 A triad includes three people who come together and operate in  a manner consistent with the below:

•Triad support structure in place based on common business initiatives

•Establish and align on resonant values

•Create safe space; Provide honest feedback to one another

•All for one and one for all (responsibility)

•All points of view are considered

•Leverage each other’s strengths/manage around weaknesses

Benefits of working together in a triad:

•Having two other people directly supporting you in your goals

The triad structure and its benefits are detailed in the  New York Times bestseller Tribal Leadership by Dave Logan, John King and Haley Fischer-Wright principles and are based on an 8-year study of 24,000 people in two dozen organizations. This study mapped – for the first time – five stages of corporate culture and the unique leverage points that can be used to nudge a group forward to higher levels or performance, without using additional resources.

An Unpredictable Surprise : A Moving Demonstration of Producing More with Less

As we walked into the final plenary session, we were surprised to see a group of children musicians and singers before us. Before the performance, we were told that these student musicians came from low income families from Mexican communities and were part of a network of youth orchestras and choirs that provide young people a better quality of life. Esperanza Azteca, as the musician network is called, seeks to form better human beings through music. The project is a joint effort among local communities, local, state and federal governments and the Mexican Chamber of Deputies, spearheaded by Fundacion Azteca. The program currently features 55 orchestras in Mexico and El Salvador, encouraging values such as discipline, excellence and teamwork in over 13,000 talented youth.

The first piece was wonderful, featuring a trumpeter who we later learned had just lost both of his parents. The second piece marveled the first with a young violinist at the helm. And then a young boy – perhaps 9 or 10 moved to the front of the orchestra – and then began to sing. Our jaws dropped. We were witnessing the next Luciano Pavarotti in the making.  Watch and listen for yourselves:

A group of Mexican children so drove home the point of producing something extraordinary with very little to start with.

How could you accomplish more with less – less time; less resources?  Let’s ask it another way. With whom could you accomplish more with less? With which two other individuals could you begin working on a common and inspiring joint goal that neither one of you could accomplish on your own? For more perspective on the value and importance of peer to peer partnerships in bringing transformation to our planet, please see: http://www.csrwire.com/blog/posts/1119-who-do-you-need-to-wake-up-report-from-the-11th-cbsr-summit-the-transformational-company-applied.

Form your peer group of three from individuals within your organization or from stakeholders outside of your organization. Begin operating as a triad according to the bullets listed above and experience support, innovation and balance, like never before.

← Getting started with CSR