I opened my twitter account to be greeted by Eva Langoria sharing her excitement about being with us at the third meeting of Clinton Global Initiative America. It was Thursday morning, June 13th, 2013. I found myself sitting at the opening plenary session of CGI America in Chicago, Illinois, joined by nearly 1,000 business, government, and civil society leaders dedicated to boosting economic recovery and the long-term competitiveness of the United States.

Established in 2005 by President Bill Clinton, the Clinton Global Initiative (CGI), an initiative of the Clinton Foundation, convenes global leaders to create and implement innovative solutions to the world’s most pressing challenges. CGI Annual Meetings have brought together more than 150 heads of state, 20 Nobel Prize laureates, and hundreds of leading CEOs, heads of foundations and NGOs, major philanthropists, and members of the media. To date CGI members have made more than 2,300 commitments, which have improved the lives of over 400 million people in more than 180 countries. When fully funded and implemented, these commitments will be valued at more than $73.1 billion.

The mission of the Clinton Global Initiative (CGI) is to turn ideas into action. 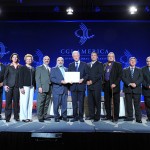 People’s greatest frustration was how to accomplish more; how to make a bigger difference and how to reach more people in making that difference.

The question I found myself still asking was “then, how could we further catalyze the results emerging from CGI America?”

Bring competitors together to take on the world’s greatest challenges

In their book, Tribal Leadership, Dave Logan, John King & Halee Fischer-Wright highlight that the highest performing organizations from their research were those whose cultures were characterized by building bridges across organizations or groups that didn’t necessarily share values, but that were bound together by the pursuit of a higher purpose or noble cause. This took the shape of forming alliances with traditional competitors where there was something bigger at stake than any one company’s interest. Across competitive companies, competition was referred to as ‘poverty’, ‘child mortality’, ‘cancer’ or ‘low literacy levels’, to name a few.

Logan, King and Fischer-Wright found Amgen – a leading biotechnology company – to fit this description of a company with a culture that saw their competition, not as other companies, but that of disease. Amgen’s success was almost unprecedented. One share purchased at the 1983 IPO price of just under $17 rose to $2,784 in the year 2000. In 1994 Amgen was awarded the National Medal of Technology, which represents the highest presidential award for the use of technology.

Facilitating conversations between competitors to create history making projects is one way CGI America could address its participants’ greatest frustration of wanting to make much greater progress in addressing critical issues on American soil and abroad.

With the biggest frustration at CGI America being similar to what we find in some corporate social responsibility initiatives, here are some steps year in your own organization to catalyze societal impact and organizational performance:

The kind of world I want to leave for my children calls for an on relenting inquiry into how can we do what we are doing differently to produce remarkably better results in the areas that will make the biggest difference on the planet. It was such an honour to participate with experienced and committed Government, Corporate and Not for Profit leaders at the 2013 CGI America. It is exciting to consider the possibilities for the world as we take steps towards catalyzing history making projects all around us. Please share with us and others what you and those in your organization discover from taking any of the actions outlined in this article.